​H.E. Mohamed Tawfik, New Egyptian
Ambassador to the United States,
Says This is the Time to Do Business with Egypt

The National U.S.-Arab Chamber of Commerce (NUSACC), in cooperation with the Egyptian Economic & Commercial Office in Washington DC, today hosted a luncheon highlighting emerging business opportunities in Egypt and featuring H.E. Mohamed Tawfik, Egypt's Ambassador to the United States. This was the first luncheon meeting with the American business community for Ambassador Tawfik, who is the first Egyptian Ambassador appointed to the United States since Egypt's historic elections in June 2012.

"Our Chamber is honored to host the first event of its kind for the new ambassador, and we are pleased to partner with the Egyptian Economic & Commercial Office," said David Hamod, President & CEO of the National U.S.-Arab Chamber of Commerce. "Egypt is a very important market for U.S. goods and services and, as recent events suggest, that nation continues to serve as a lynchpin for broader U.S. initiatives throughout the region." 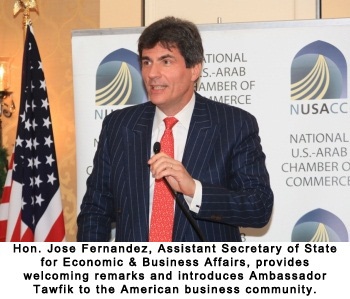 ​Hon. Jose Fernandez, Assistant Secretary of State for Economic & Business Affairs, introduced Ambassador Tawfik and stressed that "the United States supports the Egyptian people as they seek to build a new democratic system that respects universal rights, promotes government accountability and transparency, and advances economic growth, development, and regional peace and security. The United States wants to work with the Government of Egypt, Egyptian and American businesses, and the Egyptian people as partners to promote a better economic future for both countries." 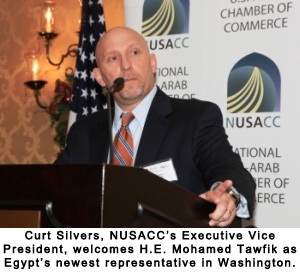 ​During his presentation, Ambassador Tawfik said, "It is important for me to remind you of the strategic partnership between the United States and Egypt. It is a strategic partnership, because it affects the vital interests of both countries. The Middle East is a very important part of the world, not only to ensure that stability is maintained, but also as it's an area of the world where you have enormous opportunities, where you have these growing middle classes and all that entails in terms of markets."

He continued, "The Economist Intelligence Unit has classified Egypt, with a number of other countries, as one of the fastest economies in the world for the next fifteen years. Another interesting study, from HSBC, anticipated that Egypt -- along with India, Vietnam, Indonesia, China, and Brazil -- will be the international powerhouses that drive world trade growth until 2025. People are already starting to realize that this is the time to do business with Egypt."

Ambassador Tawfik concluded, "I would like to thank the National U.S.-Arab Chamber of Commerce and the gracious sponsors for their efforts and their help in organizing this. It was a great honor and pleasure to be here with all of you today." 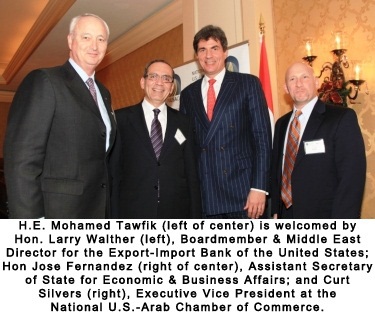 ​Sponsors of today's luncheon included: Apache Corporation, a leading independent oil and gas exploration and production company with major operations in Egypt; ARTOC Group, an international multi-disciplined private investment holding company based in Egypt; and Black & Veatch, a global engineering and construction company specializing in infrastructure development.
​
"It is a great privilege for NUSACC to host H.E. Mohamed Tawfik, the newly arrived Ambassador of Egypt in Washington DC," commented Curt Silvers, Executive Vice President of the National U.S.-Arab Chamber of Commerce. "The U.S.-Egyptian relationship has served as a linchpin to support both our nation's numerous interests in the region. The commercial element of that relationship is critically important, and Egypt has consistently been a top Arab trade partner with the United States. NUSACC is proud to support this important relationship with Egypt and looks forward to working closely with Ambassador Tawfik and his team at the Embassy."
HOME | Privacy Policy | My Dashboard | About | Contact | Sitemap
Copyright © 2021, National U.S.-Arab Chamber of Commerce. All Rights Reserved