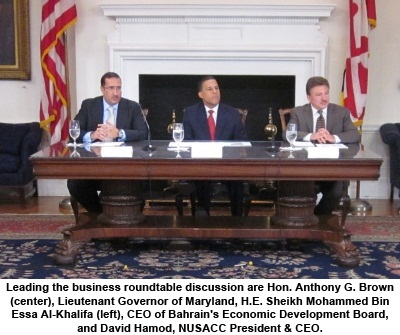 The National U.S.-Arab Chamber of Commerce (NUSACC) today supported a visit to Annapolis, Maryland by a high-level delegation representing Bahrain's Economic Development Board (EDB). The delegation, led by the EDB's CEO, H.E. Sheikh Mohammed Bin Essa Al-Khalifa, visited the State Capital at the invitation of the Hon. Anthony G. Brown, Maryland's Lieutenant Governor.
"Bahrain continues to position itself as a gateway to the larger Middle East and North Africa (MENA) region," noted David Hamod, President and CEO of the U.S.-Arab Chamber. "Maryland is among the top ten exporting states to Bahrain, and today's meeting by high-level officials helped to build on the increasingly close ties between Maryland and Bahrain."

Hamod served as moderator of a roundtable discussion dedicated to expanding trade and investment opportunities. During that discussion, EDB delegates highlighted Bahrain's focus on value-added services, including those related to information and communications technology (ICT), healthcare, and education. Sheikh Mohammed, EDB's CEO, touted the number of call centers that are opening in Bahrain, as well as that nation's increasingly high tech infrastructure.

Bahrain was one of the first nations in the region to begin moving away from industrialization toward a knowledge-based economy, reflecting that nation's comparative and competitive advantages. Unlike most of its neighbors in the Arabian Gulf, Bahrain has very limited resources, including hydrocarbons. As a result, Bahrain has built its economy around sophisticated services, primarily banking, trade, and tourism.

Lieutenant Governor Brown welcomed the Bahraini delegation and Maryland business leaders to the elegant State House, the oldest state capitol still in continuous legislative use and the only state house to have served as the nation's capitol. In his remarks, he accentuated Maryland's high tech economy, with a special focus on the Free State's institutions of higher education. Maryland has 56 colleges and universities, one of the highest percentages in the United States on a per capita basis.

Bahraini delegates included Dr. Essam Fakhro, Chairman of the Bahrain Chamber of Commerce and Industry, and other leaders from the Government of Bahrain and the Kingdom's private sector. Bahraini business leaders in the delegation represented a wide range of sectors, from aluminum to plastics, general manufacturing, information and communications technology, food processing, financial services, construction, and real estate.
​
Bill Jones, Director of Middle East Operations at Zephyr, an environmental services company, attended the roundtable. His company has done work throughout the Arabian Gulf region, including Bahrain. He concluded, "We appreciate the EDB delegation's willingness to reach out to Maryland. Delegations like this one help us to identify networked and trustworthy people, an important part of doing business in that part of the world."
HOME | Privacy Policy | My Dashboard | About | Contact | Sitemap
Copyright © 2020, National U.S.-Arab Chamber of Commerce. All Rights Reserved