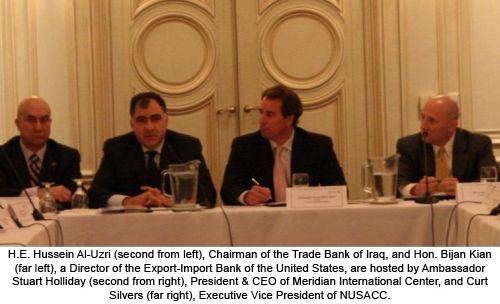 This week, the National U.S.-Arab Chamber of Commerce (NUSACC) and Meridian International Center hosted H.E. Hussein Al-Uzri, Chairman of the Trade Bank of Iraq. The dialogue focused on "Iraq’s Economic Forecast Post-Election: Updates on the Banking Sector, Investment Trends, and Key Drivers of Growth in Iraq."
Chairman Al-Uzri noted, "Iraq is an under-banked country, having only 550 bank branches for a population of approximately 30 million. We have to increase the number of banks and put more Iraqis back into the banking sector. American finance banks and finance institutions can help us. A legal and financial infrastructure has now been created to set up Iraq for investments."
He also discussed the establishment of the Trade Bank of Iraq by the Ministry of Finance in July 2003, stressing the independence of the bank from the Government of Iraq. The role of the United States in reducing Iraq’s debt -- along with the Central Banking Law, Financial Management Law, and greater transparency in the government’s budgets -- are all significant improvements in developing Iraq’s banking sector.
The roundtable meeting included approximately 35 high-level representatives from key banking institutions, including the Overseas Private Investment Corporation (OPIC), the Export-Import Bank of the United States, the Multilateral Investment Guarantee Agency of The World Bank, the U.S. Departments of Commerce and Treasury, and J.P. Morgan -- all of which are playing a role in supporting the revival of the banking and investment sector in Iraq.
Also in attendance were representatives of such major U.S. companies as Boeing, FedEx, Motorola, ExxonMobil, Chevron, and a wide variety of service-based institutions, including non-governmental organizations. U.S. Government officials from the U.S. Department of State, U.S. Department of Commerce, and the National Security Council discussed Iraq’s future in banking and investment promotion.
Ambassador Stuart Holliday, President & CEO of Meridian International, said "We see great opportunities for expanding investment, trade, and development in Iraq through a coordinated effort of public and private sector." Curtis M. Silvers, NUSACC's Executive Vice President, highlighted opportunities for an increase in growth in Iraq’s banking and investment sector, with special emphasis on private sector banking in Iraq. Hon. Bijan R. Kian, Director of the Export-Import Bank of the United States, offered remarks on methods of externalizing risk.
HOME | Privacy Policy | My Dashboard | About | Contact | Sitemap
Copyright © 2020, National U.S.-Arab Chamber of Commerce. All Rights Reserved