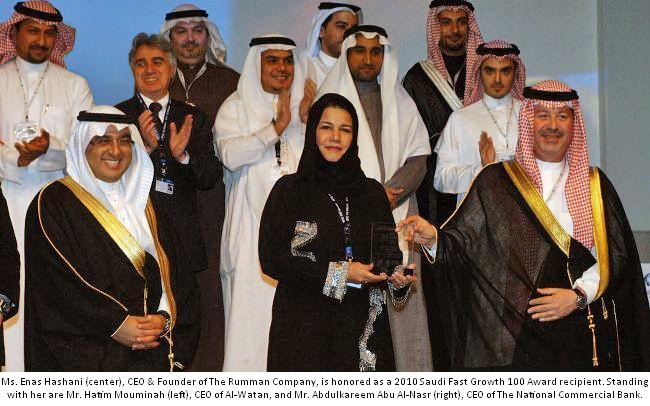 To honor Saudi Arabian companies that recently won the prestigious 2010 Saudi Fast Growth 100 Award, the National U.S. - Arab Chamber of Commerce has provided each winner with a complimentary one-year membership in the Chamber.
David Hamod, President and CEO of the Chamber, noted, “I congratulate all of you for winning this highly competitive and prestigious award. Your companies are playing a vital role in the transformation of the Saudi Arabian economy, and you are inspiring other entrepreneurs to follow in your footsteps. We hope that these complimentary memberships will allow our Chamber to be of service to you in support of Saudi – U.S. commercial relations.”
The certificates of achievement were awarded during the second annual Saudi Fast Growth 100 Leadership Summit. The four-day summit was held last week in Riyadh, Saudi Arabia, in conjunction with the 2010 Global Competitiveness Forum organized by the Saudi Arabian General Investment Authority (SAGIA).
“SAGIA has committed to making the Kingdom of Saudi Arabia one of the most competitive nations in the world. To achieve this ambitious goal, the Kingdom must nurture emerging growth companies since they are the oxygen of the economy,” stated SAGIA’s Governor, H.E. Amr Al-Dabbagh. “The winners of the Saudi Fast Growth 100 list will be the guides to our future. These trail blazers will be the most potent signal that Saudi Arabia is a dynamic economy full of creativity and opportunity.”
The Saudi Fast Growth 100 is a national program to promote entrepreneurship and innovation in Saudi Arabia by ranking the fastest-growing, privately-held emerging companies in the Kingdom. The list was created by SAGIA’s National Competitiveness Center with founding partners Al-Watan newspaper and AllWorld Network.
Anne Habiby and Deirdre M. Coyle, co-founders of the AllWorld Network, thanked the National U.S.-Arab Chamber of Commerce for its generosity in presenting Platinum memberships to each award recipient. “We greatly appreciate the support and recognition of the U.S.-Arab Chamber,” said Habiby. “The Chamber clearly recognizes that this is one of the hottest entrepreneurial environments in the world with high rates of successful start-ups. A generation of sophisticated entrepreneurs is emerging to fill the markets gaps created by the Kingdom’s large companies and government.”
On January 25, the Saudi Fast Growth 100 awards were announced during a gala dinner at the Global Competitiveness Forum. Over 600 national and international dignitaries – including business, academic, government and civic leaders – attended the event. AllWorld’s Chairman, Harvard Business School Professor Michael Porter, a leading authority on competitiveness strategy, spoke at the award presentation.
“Entrepreneurship is alive and well in Saudi Arabia. It’s happening,” noted Porter. “This list of entrepreneurs is shattering our perception of what’s really going on in Saudi Arabia. It shines a spotlight on enormous achievements that are falling well below the radar. By recognizing these companies and telling their stories, we hope to inspire others. These companies are all superstars.”
Porter noted that over a five-year period (2004 - 2008) the average compounded growth rate of the companies was in excess of 40 percent, compared to the average growth rate of four percent in Saudi Arabia. Collectively, the companies created 35,000 jobs, and 41 new companies were created by employees of companies on the Saudi Fast Growth 100 list.
Competing against 300 other companies, WorleyParsons Arabia, Ltd. placed first on the Saudi Fast Growth 100 list. Headquartered in Al Khobar in the Eastern Province, the company was established in 2003 by CEO and Chairman Fahad Al- Tamimi. Between 2004-2008, the firm’s revenues grew by a staggering 3,458 percent.
Concluded Dr. Ghassan Al Sulaiman, Co-Chairman of the U.S.-Arab Chamber and a business leader in Jeddah, “I would like to thank the organizers, partners, and supporters of this event for helping to raise awareness of small businesses and entrepreneurship in the Kingdom. At a time when countries around the world are looking for ways to create meaningful jobs in the private sector, the Saudi Fast Growth 100 is helping to pave the way for Saudi Arabia.”
HOME | Privacy Policy | My Dashboard | About | Contact | Sitemap
Copyright © 2020, National U.S.-Arab Chamber of Commerce. All Rights Reserved