PRESIDENTIAL SUMMIT ON ENTREPRENEURSHIP: FINAL EVENT OF THE WEEK IS HOSTED BY U.S.-ARAB CHAMBER OF COMMERCE AND AMERICAN LEBANESE CHAMBER OF COMMERCE
U.S. State Department's Special Representative for Commercial and Business Affairs tells business community there are "few prescriptions for prosperity more powerful than entrepreneurship." 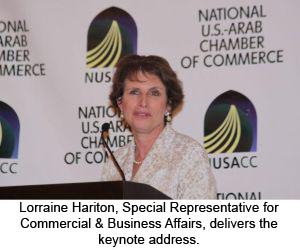 At a luncheon today for upwards of 150 business leaders hosted by the National U.S.-Arab Chamber of Commerce (NUSACC) and the American Lebanese Chamber of Commerce (AmCham Lebanon), a senior State Department official highlighted some of the deliverables from the Presidential Summit on Entrepreneurship held this week in Washington, DC.
"The message I want to convey is that our focus on entrepreneurship is meant to stimulate the kind of economic growth and prosperity that will contribute to demand for U.S. products and services, economic prosperity for our partners, and stability for the world," said Lorraine Hariton, the U.S. State Department's Special Representative for Commercial and Business Affairs. "The Middle East /North Africa (MENA) region has enormous potential, and we look forward to working together to reach that potential."
Ms. Hariton also thanked the U.S.-Arab Chamber for organizing and supporting a number of events in recent days related to the White House Summit.
"Today's luncheon was the capstone for the week," said David Hamod, NUSACC's President & CEO. "It combined the entrepreneurial spirit championed by the Obama Administration with hands-on entrepreneurs from Lebanon and around the Arab world." Leaders from the American Chamber of Commerce in Abu Dhabi and the Middle East Council of American Chambers of Commerce (MECACC) also participated in the luncheon. 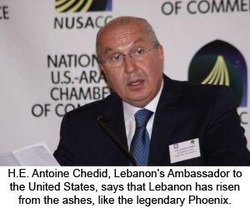 In addition to showcasing the Presidential Summit on Entrepreneurship, today's event was a celebration of Lebanon's economic resurgence. In his welcoming remarks at the luncheon, H.E. Antoine Chedid, Lebanon's Ambassador to the United States, stated, "Lebanon, like the legendary phoenix, has emerged from the ashes and is steadily regaining its former vitality. The private sector has played an active role in this process, especially the banking system, which has proved to be safe and sound."
Salim Zeenni, President of the American Lebanese Chamber of Commerce, reinforced that view. "Lebanon is experiencing exceptional economic growth," he noted. "Lebanon has moved from importing $350 million worth of U.S. goods in the mid-1990s to over $2 billion in 2009. We are on track to purchase $3 billion worth of U.S. goods and services this year, which will generate or sustain approximately 30,000 U.S.-based jobs." 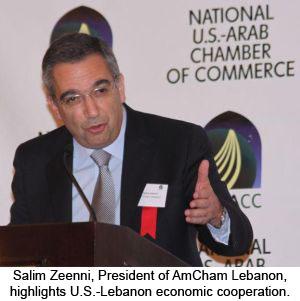 Zeenni went on to say that the United States "has moved from being Lebanon's fifth largest import source to number one, and U.S. exports to Lebanon are twice as great as the next largest exporter: China."
Excluding the Gulf Cooperation Council nations of the Arabian Gulf, Lebanon is the MENA region's highest per capita importer of U.S. goods and services.
At a time when most economies shrank as a result of the worldwide recession, the economy in Lebanon grew about 9 percent in 2009 and 8.5 percent in 2008, according to Lebanon's Central Bank. In 2010, the economy is on track to grow 7 percent, according to the World Bank.
Lebanon is also seen, increasingly, as one of the most reliable safe havens for investment in the region. Foreign Direct Investment in that nation, according to Lebanon's Ministry of Economy, grew by 20 percent last year to $4.3 billion. In the same vein, according to the Ministry of Tourism, 1.9 million tourists visited Lebanon - shattering the 1974 (pre-war) record of 1.4 million tourists.
Hamod, NUSACC's President & CEO, noted that the Lebanese market will be among the region's most attractive in 2010 - a year in which exports of U.S. goods and services are expected to break all previous records. American exports to the MENA region are expected to rebound to nearly $75 billion this year, up from $63 billion in 2009 and representing an increase of almost 20 percent over last year. 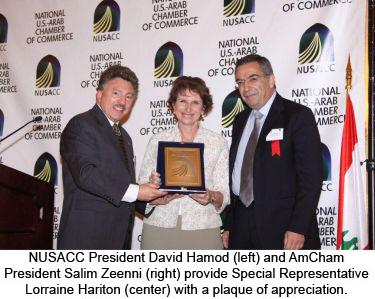 ​In his remarks at the Summit this week, U.S. President Barack Obama stated, "Throughout history, the market has been the most powerful force the world has ever known for creating opportunity and lifting people out of poverty... Entrepreneurship is an area where we can learn from each other; where America can share our experience as a society that empowers the inventor and the innovator; where men and women can take a chance on a dream."
Echoing those sentiments, Lebanon's Ambassador to the United States concluded, "The path to prosperity is not easy. But with a combination of entrepreneurial spirit, unique to the Lebanese, and strong ties to the international community, especially the United States, Lebanon will continue to make great strides along the road to recovery."
HOME | Privacy Policy | My Dashboard | About | Contact | Sitemap
​Due to COVID-19,  and in the interest of public safety, walk-in service at NUSACC is temporarily suspended. Because our clients deserve the best possible service, certification services will continue to be offered by MAIL.