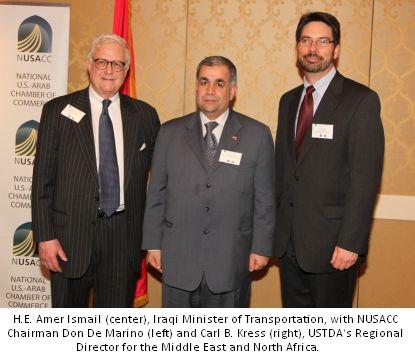 Washington, DC-- At a reception for 100 top business leaders organized by the National U.S.-Arab Chamber of Commerce (NUSACC), Iraq's Minister of Transportation Amer Ismail discussed the growing relationship between the United States and Iraq and noted that following the war, European and other nations have benefited the most so far from oil contracts and not the United States. H.E. Amer Ismail noted that Iraqis believe that "Our bilateral relations require us to have a common economic future. The U.S. helped the Iraqi people obtain freedom and rid themselves of a dictator. The least we can do in appreciation to the United States is to foster better economic relations between Iraq and the United States."
David Hamod, President & CEO of the U.S.-Arab Chamber, described the visit as an "important component of the growing relationship between our two nations. Infrastructure projects like those overseen by the Ministry of Transportation will facilitate Iraq's emergence as an investment destination, as well as improve the quality of life for the people of Iraq."
The U.S.-Arab Chamber has a long tradition of hosting business and government leaders from throughout the Arab world. Tonight's event was organized by the Chamber in cooperation with the delegation's host, the U.S. Trade and Development Agency -- part of the U.S. Government -- and the Embassy of the Republic of Iraq. Reception sponsors included The Boeing Company and MPRI, a division of L-3 Communications.
H.E. Amer Ismail and a delegation of eleven officials from the Ministry of Transportation, the Iraq Civil Aviation Authority, and Iraqi Airways were invited to participate in an orientation tour of the United States by the U.S. Trade and Development Agency. These officials are directly responsible for the development of the country's reconstruction projects and the allocation of internal resources. Iraq's three major airports -- in Baghdad, Basra, and Mosul -- are being rehabilitated, and provincial governments are upgrading the airports in Erbil, Sulamaniyah, and Najaf. Procurement has already started for investments in utility and infrastructure systems; reestablishment of air traffic control systems; and the procurement of baggage handling and passenger ticketing equipment. Iraq has four sea ports and is working to develop sea and rail routes to create cost-effective and safe routes via Iraq to Europe. Despite a challenging reconstruction environment, significant progress has already been achieved.
The objective of the Minister's visit is to widen the scope of Iraqi understanding of U.S. transportation technologies and services. The Iraqi delegation is meeting with U.S. Department of Transportation and Federal Aviation Administration officials, as well as American transportation and transportation-technology companies. Delegates will evaluate various forms of intermodal transportation in such U.S. cities as New Orleans (Louisiana) and Oklahoma City (Oklahoma).
NUSACC's Chairman of the Board, Don DeMarino, noted that Minister Ismail knows everything about oil and gas and is an expert at maritime transportation. Furthermore, he stated that "USTDA plays a vital role for U.S. companies to compete [in Iraq]."
"The Transportation sector is a key to the success of any economy. Iraq recognizes that it needs to establish a safe, secure, and effective transportation system to promote joint operation ventures with the United States," noted Minister Ismail. He said, "I welcome American companies to participate in joint operation ventures and explore investment opportunities in Iraq... Time is of paramount importance. The chances today are better than tomorrow. Seize that opportunity. There are many European and Asian companies that entered in and invested in Iraq and have been successful thus far. We are looking for public and private sector partnerships in order to decrease the burden on the government and build a healthy private sector."
According to the most recent trade data produced by the National U.S.-Arab Chamber of Commerce, Iraq is the 61st largest importer of American goods and services in the world. U.S. exports to Iraq totaled more than $2 billion in 2008, with Transportation Equipment being the second largest U.S. import sector.
HOME | Privacy Policy | My Dashboard | About | Contact | Sitemap
Copyright © 2020, National U.S.-Arab Chamber of Commerce. All Rights Reserved