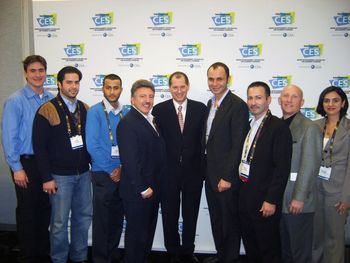 A delegation of high tech professionals from the Arab world, organized by the National U.S.-Arab Chamber of Commerce (NUSACC), wrapped up its visit today to the International Consumer Electronics Show (CES) in Las Vegas. The next stop on the Chamber’s “High Tech Road Show” tour is Silicon Valley in California.
“The International CES is the preeminent venue in the world for launching the latest consumer electronics gizmos and gadgets,” said David Hamod, President & CEO of the U.S.-Arab Chamber. “This is an increasingly important sector for innovation and job creation, and we are delighted that interest from the Arab world keeps getting stronger with every passing year.”
Now in its third year, the High Tech Road Show organized by the U.S.-Arab Chamber offers networking and matchmaking opportunities in the United States for Information Technology (IT) professionals from throughout the Arab world. Delegates from 13 Arab nations participated in this year’s program in Las Vegas, including Bahrain, Egypt, Iraq, Jordan, Kuwait, Lebanon, Libya, Oman, Palestine, Qatar, Saudi Arabia, Syria, and the United Arab Emirates. 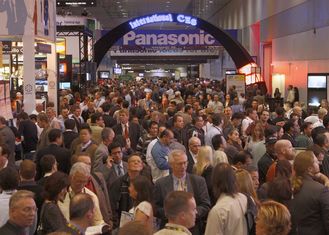 ​“We are very pleased to be partnering with the National U.S.-Arab Chamber of Commerce in support of CES,” noted Gary Shapiro, President & CEO of the Consumer Electronics Association (CEA)®, a U.S. trade association that represents some 2,000 consumer electronics companies. CEA and the U.S.-Arab Chamber signed a Memorandum of Understanding (MoU) in 2009 – the first such agreement for both organizations – to help promote the International CES and raise awareness in the Arab world of benefits of consumer electronics.
Shapiro continued, “Since 1967, the International CES has been the one spot on the globe where almost every major innovation in consumer technology has been unveiled . . . this year, from 3D TV to mobile DTV, from smartphones to netbooks to e-books, from new chips to new apps, it’s all here at the greatest show on earth.”
Attendance at the 2010 International CES, which winds down today, surpassed all expectations. More than 120,000 trade professionals participated in this year’s CES. The large number of participants highlights the fact that even during the global economic downturn, demand remains high for consumer electronics.
Concluded David Hamod of the U.S.-Arab Chamber, “Consumer electronics is an increasingly important economic driver in the Arab nations, which boast some of the fastest growing youth populations in the world. The International CES is the place to be for the ‘next big thing’ in consumer electronics, and our Chamber was pleased to be part of this remarkable event.”
HOME | Privacy Policy | My Dashboard | About | Contact | Sitemap
Copyright © 2020, National U.S.-Arab Chamber of Commerce. All Rights Reserved