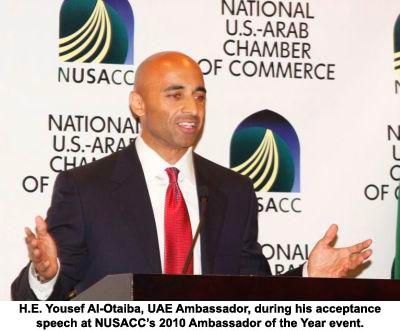 At an awards ceremony today in Washington DC, the National U.S.-Arab Chamber of Commerce (NUSACC) named H.E. Yousef Al-Otaiba, the United Arab Emirates Ambassador to the United States, as its "Ambassador of the Year." More than 150 business and government leaders participated in the awards luncheon at the Ritz Carlton Hotel, including eleven corporate sponsors whose companies are doing business in the UAE.

"Ambassador Al-Otaiba has done an extraordinary job of promoting U.S.-UAE relations at all levels," said David Hamod, President and CEO of the U.S.-Arab Chamber. "In part because of his tireless efforts, relations between our two nations are better than ever."

In receiving this prestigious award, Ambassador Al-Otaiba said, "I am truly honored to be selected as Ambassador of the Year. Commercial ties between the U.S. and Arab world are extremely important. It is a key part of my mission here in Washington."
The UAE diplomat went on to say, "As the UAE's Ambassador in Washington, I am motivated to support the expansion of commercial relations -- not just for the continued prosperity of my own country, but for that of the broader region ... As a diplomat, I view this endeavor not just in terms of profits to be made, but also in terms of the relationships they create."
​
The Honorable Adrian Fenty, Mayor of Washington DC, issued a special proclamation congratulating Ambassador Al-Otaiba on his award. In his remarks at the luncheon, Mayor Fenty said, "Yousef Al-Otaiba is changing the way that ambassadors work with local governments, particularly Washington DC. The number of benefits that the Ambassador has brought to the nation's capital are too many to name." The Mayor offered special thanks for the key role that Ambassador Al-Otaiba played in arranging for a $150 million research grant from the UAE to the Children's National Medical Center. 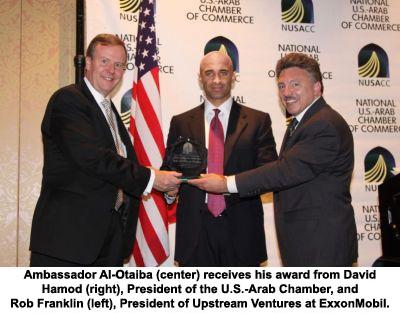 Ambassador Al-Otaiba has served as the UAE's top diplomat in the United States since 2008. Prior to that, he served for seven years as the Director of International Affairs for the Court of the Crown Prince of Abu Dhabi. During that time, he was a Senior Counselor to H.H. General Sheikh Mohamed bin Zayed Al-Nahyan, Crown Prince of Abu Dhabi and Deputy Supreme Commander of the UAE Armed Forces.

NUSACC's "Ambassador of the Year" award is presented annually to a member of the Arab diplomatic corps in the United States for his or her outstanding contributions to U.S.-Arab relations. This is the sixth year that the award has been presented, and previous honorees have included top diplomats from Saudi Arabia, Libya, Tunisia, Qatar, and Egypt.

In recent years, the UAE has become the number one destination for U.S. exports to the Middle East and North Africa (MENA). U.S. exports of goods and services to the UAE totaled $19.04 billion in 2009, and they are on track to grow this year by 16.75 percent to $22.23 billion, according to a recent report issued by the National U.S.-Arab Chamber of Commerce. In its Doing Business 2010 report, the World Bank recently named the UAE as the fifth easiest place in the world in which to conduct trade - tops in the MENA region. 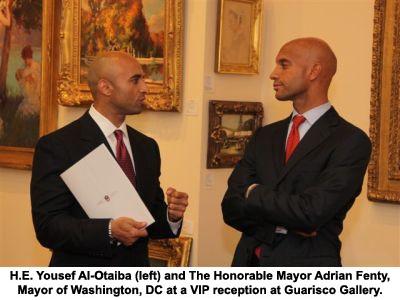 The Honorable George Salem, a former Solicitor of Labor in the U.S. Department of Labor, summed up the views of many of the sponsors. "No one fills the role of Arab emissary to the United States better than Ambassador Al-Otaiba," he noted. "He straddles Arab and American cultures and is a role model for future diplomats."
​
Rob Franklin, President of Upstream Ventures for ExxonMobil, the lead sponsor for today's event, highlighted Ambassador Al-Otaiba's contributions this way: "We see that in a period where the world faces financial uncertainties, energy challenges, and global security risks, Ambassador Al-Otaiba has shown the ability to articulate a shared vision for a better world, and the capacity to work tirelessly to achieve that vision through cooperation."
HOME | Privacy Policy | My Dashboard | About | Contact | Sitemap
Copyright © 2020, National U.S.-Arab Chamber of Commerce. All Rights Reserved