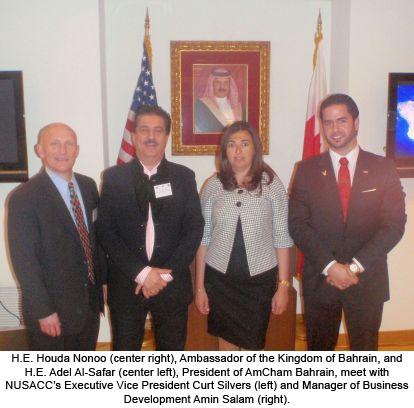 The National U.S.-Arab Chamber of Commerce (NUSACC) today wrapped up a business development mission organized for the American Chamber of Commerce in Bahrain (AmCham Bahrain). Activities in support of U.S.-Bahrain trade and investment included a high-level reception hosted by H.E. Houda Nonoo, Bahrain's Ambassador to the United States, as well as a business networking luncheon and more than fifty business-to-business meetings arranged by NUSACC and its partner organizations.
"This is the most important delegation that AmCham Bahrain has ever led to the United States," said David Hamod, the Chamber's President & CEO. "We congratulate the AmCham's new leadership, and we commend the Bahraini companies for their keen interest in doing business with their U.S. counterparts."
The 30 member delegation was led by Adel Al-Safar, President of AmCham Bahrain, and was made up of member companies of AmCham and the Bahrain Chamber of Commerce and Industry (BCCI). The delegation also included a public sector component, which was led by Kamal Ahmed, COO of Bahrain's Economic Development Board (EDB), a Government of Bahrain agency dedicated to promoting economic expansion in the Kingdom of Bahrain.
"Bahrain is a land of opportunity and growth," noted Adel Al-Safar, President of the AmCham, at a luncheon at the Omni Shoreham Hotel in Washington, DC. "Bahrain has emerged as a globally competitive economy, shaped by government and driven by a pioneering private sector. Bahrain is channeling investment into tourism, business services, manufacturing, and logistics."
The high-level delegation took full advantage of two days of business networking events in Washington DC to explore potential joint ventures with U.S. companies and to promote business through the U.S. – Bahrain Free Trade Agreement. Delegates from Bahrain represented such sectors as real estate development, foodstuffs, Industrial engineering, consumer items, education, banking, and tourism. They also used the visit to America's capital to lay groundwork for a Gulf Investment Conference, scheduled for December 2010, and a "Made in the USA" Expo in the Kingdom of Bahrain.
Representing the National U.S.-Arab Chamber of Commerce was Curt Silvers, Executive Vice President, who welcomed the Bahraini delegates. Underscoring the growing importance of U.S.-Arab trade, Silvers cited NUSACC's just-released report on U.S. exports to the Middle East and North Africa (MENA) He noted, "Despite the recent economic difficulties around the world, American exports to the region are expected to reach nearly $75 billion this year, a 20 percent increase over last year. Clearly, great opportunities exist for American and Bahraini companies interested in trading and investing together."
As benchmark U.S.-world trade grew on average only 1.52 percent annually during the global economic downswing, bilateral trade between the U.S. and Bahrain - supercharged by the new FTA - averaged 4.6 percent annual growth over the past four years as U.S. exporters expanded sales and distribution relationships."
A send-off reception this evening, co-hosted by the Embassy of Bahrain and the National U.S.-Arab Chamber, attracted more than 150 high-level guests from the U.S. business community, the U.S. Government, multilateral organizations, and other Arab embassies. H.E. Houda Nonoo, Bahrain's Ambassador to the United States, welcomed the delegation to Washington and gave a special thanks to "members of Bahrain's Economic Development Board, members of Tamkeen, and the businesswomen and businessmen who have joined us here today to take part in this very important networking event, which would not have been possible without the outstanding work of the National U.S.-Arab Chamber of Commerce."
Concluded Al-Safar, President of the AmCham, "Bahrain is, and always has been, the gateway to the Arabian Gulf region and GCC due to its strategic location. We are an ideal platform for any company to use as its entry to the Arabian Gulf, and we look forward to welcoming U.S. companies that have an interest in Bahrain as their base in the Middle East. In today's global marketplace, Bahrain sustains a unique quality of life and a stable economic system that is proving to be increasingly attractive to international investors."
HOME | Privacy Policy | My Dashboard | About | Contact | Sitemap
Copyright © 2020, National U.S.-Arab Chamber of Commerce. All Rights Reserved